Well, it’s Sunday again; and the beginning of a brand-new week. And time for a new post about #thisdog who keeps us on our toes constantly.

Remember on Friday last when I wrote about the charmed life that Ducky leads? As a reminder, you can read that post here.

Well, she wasn’t so lucky yesterday. As is our normal routine, after Ducky had her breakfast, she and I came out to the yard for a while. After we’d been out here for about an hour, I noticed she was making faces 🤪 and pawing at her nose. She looked like a pup who had just sampled a spoonful of vinegar. And then she started hacking – like she had something caught in her throat – so I opened her mouth but couldn’t see anything.

I didn’t realize it at the time, but the hacking was what the vet world calls a “reverse sneeze”.

Anyway, it was time for me to get our roast started for dinner, so I brought Ducky inside and put hubby in charge of watching her. She seemed okay, so I took care of a few other things and went to check on her myself. And she started hacking again. So, I decided to take her to the emergency vet to see what was going on. She obviously wasn’t feeling up to par.

We got to the emergency vet, checked in, and I put Ducky in my lap. I turned her to face me and that’s when I saw it. Her upper left lip was swollen to where it was drooping over the lower lip even while she was panting. So I tied her leash to the bench and walked over to the receptionist to tell her what I’d just discovered. I went back to get Ducky so I could put her on the scale.

The receptionist and I put 2 and 2 together and decided Miss Ducky was having an allergic reaction to something. So one of the techs brought her to the back, the vet gave her a shot of Benadryl, and then they put her in one of the kennels so they could observe her for a little while. And I kept busy texting with two of my friends.

About half an hour later, the same tech came out to get me and we walked back to one of the exam rooms. We talked about what had been going on the last couple of days with this crazy dog. Then the vet brought Ducky into the room. In her attempts to make the itch go away, she had rubbed a small spot on her nose raw. And she had pooped in the kennel, so it was time to let her be with me. I noticed the swelling on her lip had gone down considerably already.

The vet, tech, and I talked a little bit and decided that Ducky had probably air snapped at a bee 🐝 buzzing near her earlier in the day and got stung in the lip in the process. Ouchie!!

While the tech printed out the discharge instructions back in the treatment area, Ducky and I waited in the exam room. I could tell Ducky was already starting to feel better: she started whining and pawing at the door. “Let’s go home, Mom! I wanna get outta here!”

She slept on the couch most of the rest of the afternoon and evening and went right back to sleep in her crate at bedtime. 😴 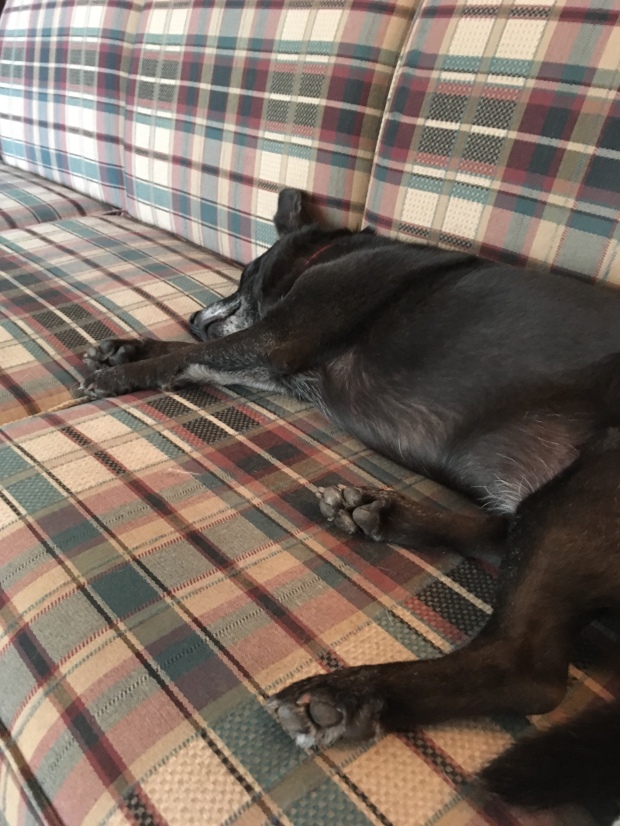 She awoke this morning, “bright-eyed and bushy-tailed” as usual, and in full-on, turbo-charged mode. Ready to beg hubby for some of his cinnamon roll.

I wonder if this will be one of those life’s lessons learned for Ducky? I hope so!! If not, I at least have more Benadryl in the house now to treat her with. My crazy, lovable, challenging dog! I don’t know about her sometimes, but I love her to the moon and back! ❤️❤️

With all the rain in our forecast today it seems a good one to think “out loud”.

First of all, I hope everyone enjoyed the holidays and had a safe and happy New Year’s Eve/Day!

We enjoyed the company of my only sibling – my older brother – from the 19th to the 28th of December. Poor Ducky was stressed-out a good part of the time. She just doesn’t like “strangers” in her house, especially men who are taller than me. All in all though, she did okay. Our house does not lend itself to containment at all, so we kept her harnessed and leashed.

The day after Christmas we left the dogs on their own in the house for a few hours while we spent time meeting up with hubby’s brother and sister-in-law. I made the mistake of not getting a pet sitter to let the girls outside for a break….

When we arrived home, I immediately leashed Ducky and took the dogs out to the backyard while hubby and bro put up their jackets. It was then that hubby found the consequence of Ducky’s boredom….

Several of our Christmas packages had been chewed on, and the contents of one was totally gone. Nine tiny pieces of dark-chocolate candy that bro had brought home from his trip to Costa Rica. I felt like such a jerk! Lesson learned the expensive way….

Hubby, the dogs, and I spent the next two hours at the vet’s. First Ducky, and then Shadow, were treated to prevent chocolate poisoning. I won’t go into detail, so suffice it to say all is well.

Now, I know that before Christmas I had promised y’all a “Part 2” post about the change in the dogs’ food. Well, it’s not even in the draft stage yet; but I’ll get it done eventually. For now, though, it’s time to get some lunch and finish reading the book I started right after Thanksgiving.

The dogs are enjoying a nap and allowing me some much-needed peace and quiet.