As of last Friday (October 4th), we have a new Golden Retriever in the family. 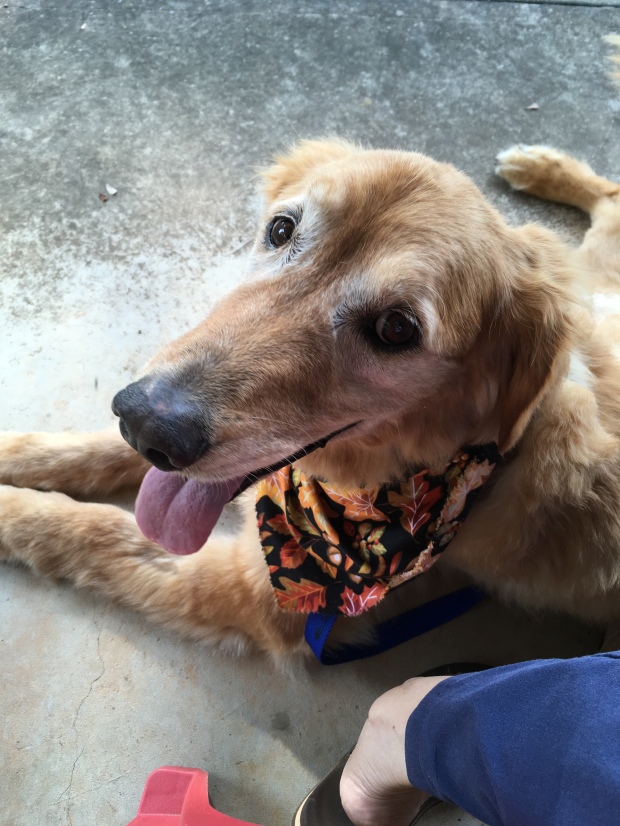 He was found as a stray about two months ago. The lady who found him spent three days trying, unsuccessfully, to find this handsome boy’s owner. No tags, no microchip, no known owner. So, our local breed rescue took him in, vetted him, and placed him with a foster.

The poor boy’s fur was so matted that he had to be shaved down to the skin. The fur has been growing back, though he does still have some bald areas.

And he tested positive for heart worms. He was settling into his first foster home when his foster had to leave town indefinitely. This sweet boy was being boarded at the veterinary hospital that cares for all this rescue’s charges.

The volunteer coordinator called us last Tuesday, we met Radar on Wednesday morning, and on Friday afternoon I picked him up.

When Radar first saw my hubby on Wednesday morning, it was as though they had known each other all of the dog’s life. Radar practically did a Snoopy happy dance! He was barking and wagging his tail and bouncing around happily. Sorry, no photo of the bouncy boy, but here he is with hubby.

And here’s one of Radar giving me the happy paw.

And one where he and Ducky met each other. Ducky was so good! No growling, grumbling, or snarling. Just polite sniffing. The way Callie taught her so many years ago.

Once Radar’s heartworm treatments are complete and he tests negative, we will have first dibs on adopting him.

This boy is Heaven-sent. Callie and Shadow found him for us and intervened in his foster home placement. He’s a very handsome boy; and he’s a perfect fit for our little family. He’s the boy hubby and I need, the brother and friend Ducky needs, and we’re the permanent family he needs.

Some months ago a friend posted something on Facebook that asked her gal pals – in essence – “if you had to choose between a man and a dog, which breed would you choose?” My answer was “a male Golden Retriever that I could name Radar because he would instinctively know what’s about to happen. Just like my favorite character on my favorite tv show of all time, M*A*S*H.” That was only a few weeks after Shadow had been reunited with Callie. I wasn’t ready for another dog, not even a Golden. And Ducky wasn’t ready yet either. She missed Shadow, but she was enjoying all the extra attention from hubby and me.

Back in July I decided I was ready. And Ducky was ready. I think hubby was ready a week or two after Shadow had gone ahead.

On August 3rd, our local Golden Retriever rescue group had a meet and greet at the nearby Petco store. Hubby and I went and turned in our adoption application. In September, a volunteer called to schedule our home visit. We thought we were in for a long wait, so we relaxed and continued spoiling Ducky with extra love. I knew that when the time was right, Callie and Shadow would send us the right dog. Our angel girls know exactly what we need.

As I write this post Radar has been with us for two and a half days. Hubby and I love him already. This boy is so sweet, so easy-going, so gentle. And happy. That tail seems to wag constantly, sometimes even when he’s asleep. He seems to be “settling in” pretty easily. He loves Ducky, though Ducky’s not quite sure about him yet. She will be in time. At least he shrugs off her grumpy moments. And gives her a look like “what-ever” as he gives her some space. I think they’ll eventually be great friends as well as siblings.