Ducky has been on leash restriction in the back yard since January 2nd. She hurt herself during a zoomies attack on New Year’s Day.

Ducky has been really, really “good” these past two weeks. She has had her moments; but generally speaking, she has dealt with the physical inactivity quite well. (Thanks to nose work games, some limited slow walks on the treadmill, and twice-daily pain meds.) It makes me hopeful that helping her to calm down – or stay calm – will continue to get easier. Today is her first day of freedom; and after 20 minutes of fun in the yard and another 10 here in the house, this is the result…. 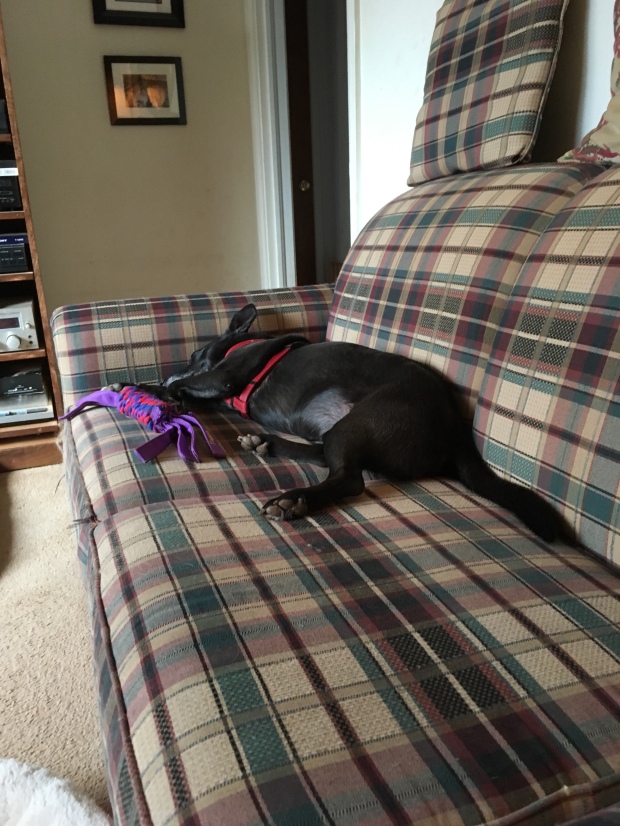 Then there’s Shadow. I’m still having to spoon-feed her at times in order to get her to eat. And so many questions in my head. Up until the middle of last week, her knee was still bothering her. She had a hard time standing in the kitchen or bathroom. She didn’t trust the throw rugs to not skid underneath her.

Now the knee is healed, she’s enjoying her time outside, and she’s even inviting Ducky to play. Last week the vet watched a short video I made of Shadow attempting to eat her meals. I asked him if maybe her depth perception issues might be causing her “pecking” motions at her plate/bowl.

After watching the video, he felt around her neck and shoulders and said that her muscles were somewhat tense. That discomfort was more likely the cause. And, it made the proverbial lightbulb turn on over my head. That discomfort in her neck – especially – and shoulders was probably why she had been walking away from her bowl but gladly eating off the spoon that I was holding up to her normal chin level. It wasn’t that she was playing me for the special attention. It was that it hurt too much to lower her head close enough to her bowl long enough to eat.

The arctic air wave of the week plus around the holidays just made it tougher on all of us – my and hubby’s joints were bothering us more than normal too – but the last few days of sunshine and slightly warmer temps gave us all some relief.

This morning Shadow went right to the plate of food and ate it without pause. Well, she did pause when I turned it around for her but only for a moment.

My hopes for Shadow? No more pulled CCL’s; no more severe arctic air waves to worsen her joint and muscle aches; and, fewer age-related health issues. And many more happy, playful days here with us.